Now available for a limited time only at Bundobust. Manak 4.2% Cream Ale is potentially Bundobust Brewery’s most drinkable beer yet.

Stunningly normal beer. The sweet spot between lager and ale, backed by delicate malt and charged with American Nugget hops. The definition of a cold one.

Manak is the answer to the question, “Beer?”. It’s a beer for when you want a beer. The perfect foil to finishing work and having a couple of cold, slippery ones. It’s a thinker not a drinker. The suds are big and true – it’s a cartoon pint, the kind they knock back on lawnmowers in American cartoons.

Cream Ale is an American style, originally dreamt up in the mid-1800s as a response to the influx of German lagers into the US. A cream ale, and our rendition, is a hybrid between an English Ale and a German Lager. It’s the drinkability of lager crossed with the more-forward taste of an ale. It’s a beer!

We recommend knocking one (or three) back with a portion (or three) of Okra Fries. This is dangerously close to ultimate refreshment. This is living. 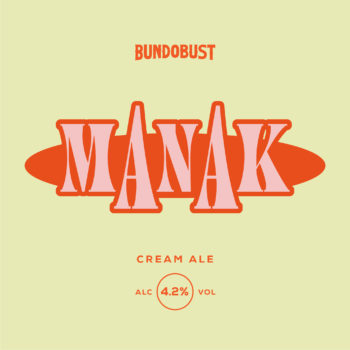